The People’s History Museum, in Manchester, are currently undertaking a research project which also focuses on franchise reform.  We asked them to contribute a few paragraphs to The People’s Voice website.

The People’s History Museum, in partnership with the Working Class Movement Library, have embarked on a new Heritage Lottery funded project which aims to build on the strengths of both collections by acquiring material related to the fight for the vote.  Over five years, Voting for Change aims to address gaps in the collection by acquiring items ranging from the Peterloo Massacre in 1819 to lowering the voting age in 1969, including the reform acts of the 19th century and the Representation of the People Act in 1918.  The project also allows the museum to research and collect items charting the radical movements which contributed to laws being changed, thus widening the scope of the collection, and also adding to contemporary research in the area.

Of its numerous acquisitions so far, the museum has collected an important 1819 print by George Cruikshank.  Universal Suffrage or the Scum Uppermost was printed by Tory bookseller George Humphreys in July 1819, just one month before the Peterloo Massacre.  The print shows a representation of popular radical reform, which is thought to be tantamount to ‘revolution’.  The many headed monster, typical of Cruikshank’s work, triumphs over institutions supposedly honoured by the British including royalty, religion, the Magna Carta and the arts, as well as numerous others.  The monster wears the cap of liberty on its tail, signifying freedom and the pursuit of liberty.  The print is designed to warn people of the fatal consequences the calls for political reform might have on the values, culture and rights the upper classes enjoyed.  At the same time, the print demonstrates the strength of feeling for reform by the British working class in the weeks leading up to Peterloo.

Moving forward, the museum aims to expand on its collection of Chartist and NUWSS material. Also, while PHM has an extensive banner collection, the frequency in donations of banners is becoming rarer. Therefore, using the fund to acquire banners relating to the reform acts and the votes for women campaign is another avenue the museum is keen to pursue.

The newly acquired material will be used to ensure that PHM’s collection is at the heart of the visitor experience, increasing engagement and community accessibility.  New acquisitions will be displayed in the museum on Main Gallery One and will be updated regularly.

This song was printed in Kilmarnock for the 1852 General Election, in which James Campbell was the prospective MP. Author and printer details are unclear, but this print exemplifies the power that such songs held over political persuasion. 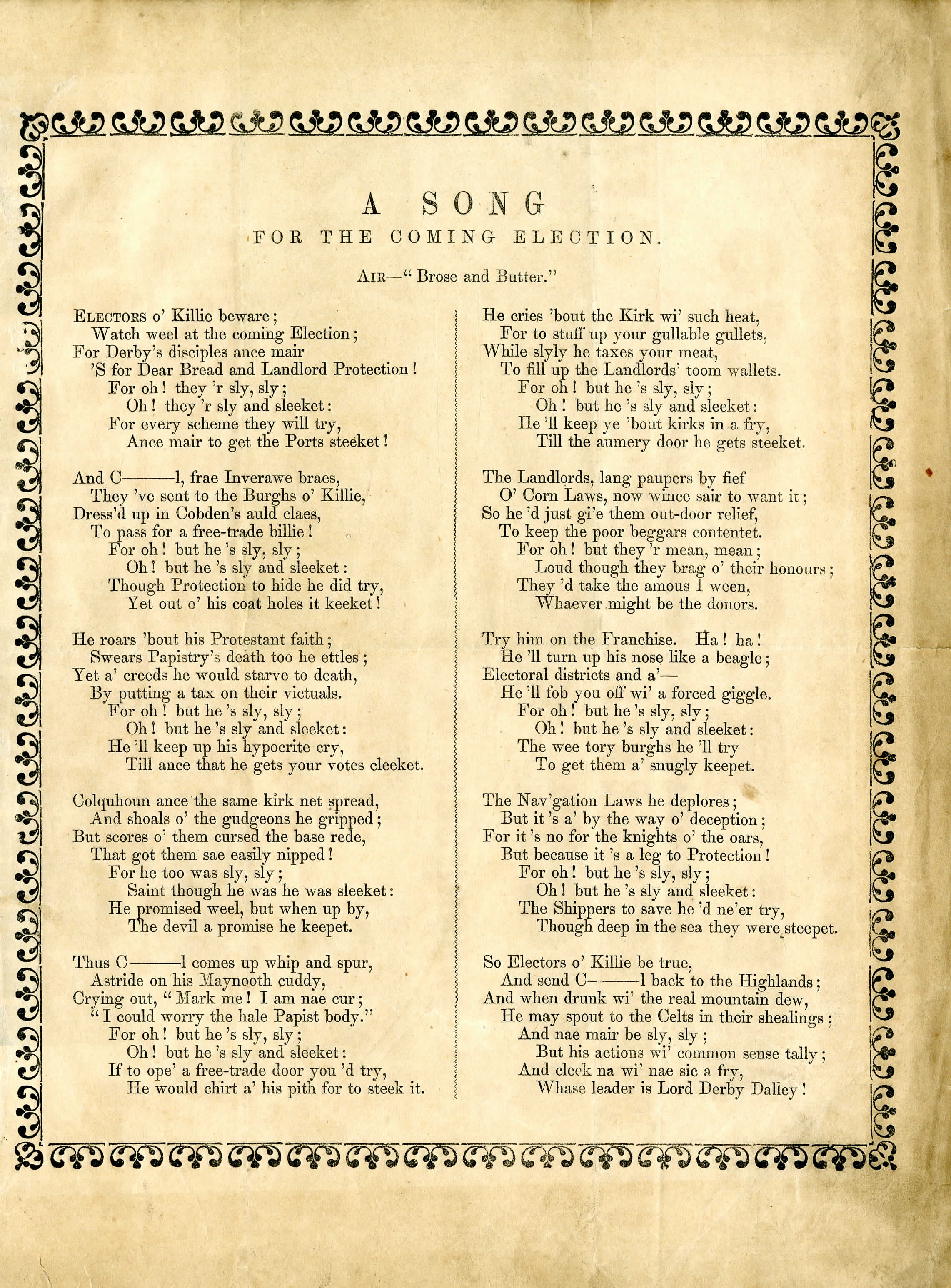